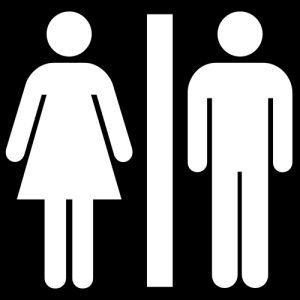 Planning a Unisex Bathroom: What You Need to Know

Unisex bathrooms are becoming increasingly popular - but it’s still a contentious subject in some quarters. Just look at the ‘bathroom bill’ debate that’s currently raging on the other side of the Atlantic.

In this article, we’ll wade through the moral arguments for and against unisex bathrooms, and also lay out some of the practical considerations you’ll need to keep in mind when designing your own.

In recent years, society has made huge strides towards gender equality - but unfortunately, we still have a lot of catching up to do when it comes to washrooms. It may not be obvious on the face of it, but traditional bathroom design has always favoured men: women tend to use the bathroom more frequently than males because, on the whole, women have smaller bladders. Unlike males, they also need to attend to matters of feminine hygiene.

Women also take longer to use the bathroom, not only because they need to urinate in a seated position, but also because women’s clothing (tights, skirts etc.) is generally more restrictive.

The problem is that even though women use the bathroom more frequently and take a longer time to do so, male and female bathrooms have always tended to be the same size. This results in long, uncomfortable queues for the ladies’ room. Queuing for the toilet isn’t something men have to deal with - so why should women? Unisex bathrooms would go a long way towards leveling the playing field and helping to ensure so-called ‘line equality’.

Gender neutral washrooms are also far more inclusive for transgender people. Deciding which bathroom to use is a common problem for people who identify as transgender; in a recent US survey of transgender people, nearly one in ten respondents reported that they’d been denied access to a bathroom in the past year. It’s a sad fact that transgender people can also face taunting, threats, and even violence for using the ‘wrong’ bathroom. If unisex bathrooms were to become the norm, this would no longer be a problem.

Another benefit of unisex bathrooms is that they make it far easier for parents to accompany children of the opposite sex to the bathroom. Most men would feel uncomfortable entering a women’s bathroom, and vice-versa; the only alternative is to let children use the facilities unattended. Although it’s rare, leaving children unattended in public bathrooms can have tragic consequences: in 1998, a nine-year-old boy was murdered in a public restroom when his aunt decided to let him use the men’s bathroom alone.

Finally, there’s another, altogether less high-minded benefit to installing a unisex bathroom: they save money. By having a single bathroom for all users, you’ll save your business valuable square footage, which can be put to use for more commercial purposes. You’ll also need to purchase and install fewer fixtures overall, which in turn in will reduce the amount of money and time you spend on maintenance and cleaning.

Of course, unisex bathrooms are a contentious issue, which is reflected by the intense media scrutiny to which they’ve been subjected over the past few years. One of the main concerns of the people who oppose unisex bathrooms is that they could lead to a rise in sexual assaults. Others may object to them on religious grounds.

Much of the controversy surrounding gender neutral bathrooms seems to centre on children. When a state primary school in London fitted unisex bathrooms, it prompted fury among many parents, and an online petition against the toilets attracted over a thousand signatures.

Furthermore, many people feel embarrassed by using the toilet around people of their own gender, much less the opposite gender. Paruresis, or ‘shy bladder’ syndrome, is form of social anxiety that prevents sufferers from being able to go to the toilet in the presence of others. It’s thought to affect around 4 million men and women in the UK, although the real total may be far higher - by its very nature, paruresis tends to be underreported. While there’s no data on how unisex bathrooms affect bladder shyness, it’s reasonable to assume that the problem would be compounded by the presence of members of the opposite sex.

All that said, the increasing prevalence of unisex bathrooms is no doubt a byproduct of the wider move towards complete gender equality in society in general. After all, we don’t separate bathrooms by race or religion - so why do we still segregate them by gender? The likelihood is that those who oppose unisex bathrooms will soon find themselves on the wrong side of history, and if social trends are anything to go by, then mixed gender washrooms may well soon become the norm.

With that in mind, let’s turn our attention to the practical aspects of building a gender neutral washroom.

A unisex bathroom will obviously need to be larger than a single sex bathroom in order to accommodate users of both genders. While there are no hard and fast rules about how large a washroom should be, the Health and Safety Executive has issued guidance on the number of toilets and washbasins that should be provided per person in a mixed use bathroom:

This should help you figure out the required dimensions for your washroom. The recommended dimensions of each individual toilet cubicle are set out in the Building Regulations Part M. The building regulations also dictate that when four or more cubicles are provided in a washroom, one of them must be an enlarged cubicle for disabled users. You may also wish to provide baby changing facilities if appropriate.

Since all toilet cubicles will cater for women, you should provide a sanitary towel waste bin in each stall. We also sell recessed designs that can be mounted into a wall, which will help save space.

For privacy reasons, it might seem like a good idea to rule out urinals altogether; however, installing them in your unisex washroom would reduce waiting times for female users, and also help minimise the risk of pee on the toilet seats. Bowl urinals afford greater privacy, but troughs urinals are cheaper and take up less space. You could install a modesty screen between each urinal to further enhance privacy, or you could go one further and install your urinals in a separate section of the washroom, obscured from view behind a partial wall.

The extra room afforded by a mixed use washrooms means that you could consider installing a stylish freestanding hand wash fountain instead of individual hand-washing basins. You also have the option of a communal trough sink if you wish to bring costs down further.

Of course, planning a unisex bathroom can be a complicated business. If you’ve been inspired by this article and would like to find out more, then get in touch with us today to discuss your requirements.