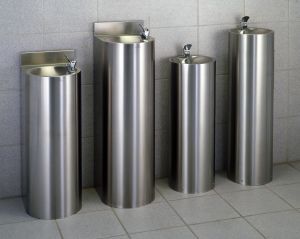 Washware Essentials were recently contacted by one of Britain’s most prestigious public schools when they needed a safe, efficient and cost-effective way of keeping their students hydrated. Read on to discover how we supplied them with a set of low-cost, low-maintenance stainless steel water fountains and helped them overcome a problem with installation.

Rugby School is one of the oldest independent schools in the UK. Established in Rugby, Warwickshire in 1567, the school was founded on the belief that education is as much about forming character as it is about academic achievement.

Today, the school caters to around 800 day students and boarders of both genders, and consistently boasts exam results far above the national average. Notable Old Rugbeians include Lewis Carroll, Neville Chamberlain and Salman Rushdie, among many others. The school is also beloved of sports fans around the world for being the birthplace of rugby football.

Rugby School’s Estate Projects Manager, Paul Barnes, says: ‘We needed a safe, reliable and cost-effective way of providing drinking water to children in a boarding house environment. After some research, we decided that drinking fountains were the way to go.’

Although Paul was set on drinking fountains, he was concerned about conforming to the relevant water bylaws - specifically, the Water Regulations Advisory Scheme, or WRAS. In order to attain WRAS approval, water fittings ‘should not cause waste, misuse, undue consumption or contamination of the water supply and must be of an appropriate quality and standard’.

Having scoured the internet for low-cost, high-quality drinking fountains, Paul naturally found himself on the Washware Essentials website - where else? -  and after browsing our range of water fountains, he gave us a call to discuss his requirements. Once Paul had filled us in on the details, we were able to recommend our WRAS-approved floor-standing water drinking fountains.

Constructed from hardwearing 304-grade stainless steel, these water fountains are robust enough to withstand constant use from thirsty pupils, as well as being easy to clean and maintain. Stainless steel is also exceptionally resistant to vandalism, which makes them an ideal choice for school dormitories - although of course, we’re sure that Rugby School pupils are generally a well-behaved bunch...

Rugby School houses students as young as ten, which meant that safety was another area of concern for Paul. Thankfully, the rounded front on these particular water fountains means that there are no sharp corners for students to catch themselves on when running to class.

These water fountains also come with a WRAS-approved bubbler tap, meaning that Paul could install them safe in the knowledge that they would comply with all the relevant water bylaws.

Satisfied that these were the best fittings for the job, Paul went ahead and ordered six units.

‘The customer service I received from Washware Essentials was excellent,’ says Paul. ‘The delivery was also very prompt. However, we ran into a problem after installing the first six units: it turned out that our water pressure was too high, which resulted in the water from the bubbler tap overshooting the fountain edge.’

Paul got back in touch with us to find out what to do. After assessing the situation, we were able to recommend the installation of an adjustable water pressure reducing valve in order to tame the stream of water coming from the bubbler tap.

‘Thankfully, the pressure reducing valve did the trick,’ says Paul. ‘Once we’d gotten it installed, we were able to adjust the stream of water from the bubbler tap so that it no longer overshot the fountain.’

The water fountains were an immediate hit with the pupils at Rugby School - so much so that Paul went on to order and install a further 11 units in the following weeks. With the right care and maintenance, the new drinking fountains will help the pupils of Rugby School stay happy, hydrated and ready to learn for years to come.

‘The team at Washware Essentials were helpful, knowledgeable, and a pleasure to work with,’ says Paul. ‘I’d recommend them to anyone.’


If you’re a school facilities manager and you’d like to find out more about our range of sanitary washware products, get in touch with us today to discuss your requirements.